There used to be a simple principle when it came to getting custom designed T-Shirts printed. They would either be fairly cheap and very crap (screen printed); more expensive, but still fairly crap (transfer sheet); or very expensive and still not very good (embroidered).

Most people ended up with transfer printed white t-shirts, and since I hate white t-shirts, I generally didn’t get custom t-shirts done, and if I did, generally didn’t wear them. Then for GenCon last year, my friends @luciddestiny and @syleth found an American company that could do fully custom t-shirts: you chose the colour of the t-shirt and of the writing, and put whatever image you wanted on it.

And the t-shirts they produced were awesome, with white text (quotes from the book) on the front and full colour pictures of the cover on the back.

I remember thinking that if there was ever anyone in the UK who offered the same service, I could think of a whole host of things to do with it. And then a couple of months ago, I came across a company called T-Machine (http://t-machine.co.uk) who offered exactly that service. You design your t-shirt using a tool on their website and they then print it and send it to you. (Well that’s the theory, if not – it turned out – the practise). Anyhow, I immediately thought of an idea I’d once had which was itself copied from a t-shirt General Tangent had – which was a quick reference cheat-sheet for a piece of unix software printed upside down, so that it could be read by the wearer.

I figured that it would be pretty cool to take my favourite ever Game Night review (favourite not simply because of what was being said, but because of the skill with which it was being said, and for the fact that it was being said by a highly regarded peer of mine) and put some excerpts from that on the t-shirt, upside down. So if ever I was feeling down about my writing abilities (which happens quite often) all I’d have to do is wear my special t-shirt, and then periodically look down.

Now it didn’t quite go according to plan, and it is because of this that I can offer only a qualified recommendation for the guys at T-Machine. The exact sequence of events that occurred is something like this:

1) Create t-shirt design, entering the text, and then clicking on the rotate tool several times until the text had been rotated through 180 degrees.

2) Enter in all my payment details and hit go. According to their website it can take 5 working days plus delivery to get your t-shirt.

3) Wait 50 days. Several times I remembered about the t-shirt and resolved to call them, but then forgot.

4) T-shirt finally arrives, and is printed… right-way up. Yes, they assumed I was a moron who’d both managed to get the supposedly right-way up text upside down and then failed to notice this, even though it was there on the screen in front of me, upside down, and superimposed on a little t-shirt shape. And having assumed I was a moron, they’d “corrected” my “mistake”. 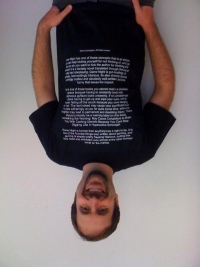 7) Call, and talk to a very nice chap called Nathan, who agreed that my design had indeed been entered upside down and should therefore have been printed that way, and promised to produce it and send if off that afternoon.

3 days later it arrived, all good.

I wore it all that day, and you know what? It might be supposed to be a joke, but I did keep finding myself looking down and reading bits, and it was really nice.

So in the end, you get a good result, but if there is a notes section on your order (given that it was two months ago, I can’t remember) I’d suggest putting in an explanation if you’re doing anything strange.

And if you want to know what the t-shirt actually says, you can click on the picture to the side to get a larger version. Either that, or turn up to the next London Writers’ Club, because I might wear it there.