It Appears I Am Indeed Sexist 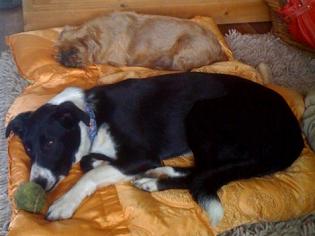 Boys are raised to become aggressive go-getters as men, and when they indeed aggressively go-get society praises them. But women are inhibited in such behaviour by a fear that they will be seen as acting in a selfish or unfeminine manner, and when they do take the iniative in the workplace, they are often condemned as being selfish and unfeminine.

So will I, a proud follower of progressive politics and thought, do the same when I have the children? Will I treat any boys I might have differently from any girls, purely because of their gender. Well the answer to that question is… dammit… yes. Why do I say that?

Because I’ve realised I treat my dog differently because she’s a girl.

The picture at the top of this post shows @4pawsnexus together with a friend’s dog, who we’ve dogsat for some extended periods over the last few years. She’s probably twice the size of him and far more athletic; she’s bred to herd sheep for hours at a stretch on cold Cumbrian hillsides, he’s apparently bred to kill rats, but I’m pretty sure that that was then and this is now, and that he’s now bred to look cute on laps. (Which he does, very – he’s like a miniature four-legged wookie).

With him, I would always tell him that he was a “big, brave boy”. But I always tell her that she’s a “good little girl”.

Yep, looks like I’m as unconsciously sexist as the next man.