I’m currently closing in on the completion of the first draft of what will hopefully become my second published novel. Word count at the moment is 90,000+ words, every single one of them written on a train.

Writing on the train has been my standard modus operandi for some years now. But just recently, while sorting through my old emails, I found one I sent to various friends that identifies exactly when it started:

The project began today, with the taking of the Linux powered mobile writing unit (known hereafter as “the laptop”) on the home-to-work tube journey.

Project initiation was initially delayed by technical issues, but when I got into work I had another look at the laptop, and this time was able to figure out how to turn it on. A second attempt at project initiation will therefore be made during the second “work opportunity window” this evening, on the work-to-home tube journey.

That first laptop was a cheap, reconditioned model I’d gotten from Maplins, and it was very much an experiment. At the time, I had no idea whether or not I’d be able to write on a busy, noisy, bouncing tube train. As someone who’s always written on a word processor, all my writing had thus been done at home. I was doing a monthly column for Mongoose, and was finding that the writing of each column was dragging over a whole weekend. And yet, I spent an hour and a half each weekday on a train, with nothing to do save read or think. 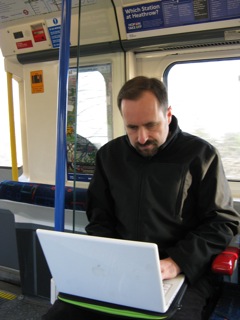 Writing on the train might have been the solution, or it might have been a complete failure. I might have found it impossible to concentrate, to be creative, in what isn’t an obviously creative environment. There was only one way to find out, which was to try it, but given the high chance of failure I was keen to keep my initial costs down. Which was why I went to Maplins.

And having tried it, it worked. It turned out that I could write on a tube, much better in fact that I ever did at home. Freed of the distractions offered by books, TV and the Internet, I had nothing else to do save write. It isn’t other people who distract me from writing, it’s myself. I don’t need peace, quiet or solitude – I just need to have nothing better to do.

I guess that makes me lucky.

I followed up that Linux laptop with a G3 iBook (Mac). That eventually suffered a catastrophic failure somewhere in the graphics circuitry, following which I bought an Intel iBook. That’s still with me, but it stays at home now, because my writing tool of choice is my MacBook Air, which was my Christmas present to myself a couple of Christmases ago.

And in answer to the question you might have been asking since the second paragraph of that email, yes, I did feel a right twat sitting on a train with my new laptop unable to figure out how to turn it on. (I seem to recall that the problem was that at home, it had sat in a docking station, and the docking station had an on/off switch — but without the station, I needed to find a second, more hidden switch, and that took a bit of finding).