Enough With The Spoilers! 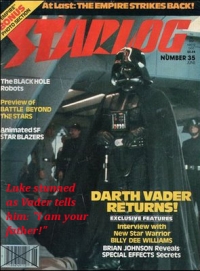 How many of you guys reading this remember the now infamous cover of Starlog #35 (right) in which, just ahead of the UK release of The Empire Strikes Back, they totally blew the main revelation of the story (that Vader was Luke’s father), thus totally ruining the film for anyone unlucky enough to catch a glimpse of the magazine’s cover?

No? No-one? Not one of you? Thought so. And do you know why I knew that?

Because it never happened, of course. An SF magazine would never, ever print spoilers for a not yet released or transmitted TV programme or film; if they did, an army of enraged geeks would burn down their headquarters, pausing first only to grab the editorial and writing staff so they could be hung from lamp-posts until they were deader than William Shatner’s wig.

So why does this simple principle, “I haven’t fucking seen it yet so I don’t want you to tell me what happens!”, not apply to the realm of soap operas?

Full Disclosure: I watch Coronation Street. I’m not ashamed. I think it consistently shows a mix of pretty good acting combined with classic British screenwriting, and is an entertaining story of ordinary British men and women struggling to survive life in a crime-ridden, hellhole community with a murder rate some ten times that of Soweto.

Anyhow, the problem with watching Corrie is that any suspense you might have had is totally removed by the avalanche of spoilers contained in every TV listings magazine. It’s not enough to avoid reading the magazines; the spoilers are on the covers in text so big and bright you’d need to have your eyes surgically removed every time you went into a WH Smiths in order to maintain any sort of ignorance about what’s about to happen.

A relative of mine reads all these magazines and happily regurgitates her knowledge if you make the mistake of watching Corrie with her.

“He’s going to die. She gets pregnant but then loses the baby. He goes to prison. She has an affair with her new boss.”

But it makes no difference in the end. You’d have to be blind to manage to watch an episode that contains a major plot point without finding out about it in advance. It really pisses me off. I know the TV companies give out this information to attract viewers to storylines, but it’s crap that they degrade their own product just to marginally inflate their viewing figures. (And I think in the long term, they might find that people stop watching).

People often talk about what laws they would pass if they were Prime Minister for a day. I’m thinking I know what I would pick. Or maybe I need to start emailing any MPs who come high in the ballot for the next round of Private Members bills?