My God! It’s Full of Cakes! 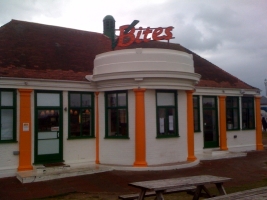 Last weekend my other half and I took the dog for a long walk down the sea front to Hove Actually (old joke: Brightonians refer to Hove as “Hove Actually” because if an inhabitant of Hove is asked if they come from Brighton, they invariably reply, “Hove, actually”) and ended up having breakfast at Heather Mill’s new vegan cafe, VBites.

Anyhow, we’d been down a couple of times before, but this was the first time I remembered to take some pictures. The previous two times had both been around lunchtime on sunny weekends, and the place was packed. (It’s next to a very popular children’s play area). Even sitting at some of the many tables outside, we’d had to wait for a spot, and then when we did sit down, the waiters were run off their feet.

This time though, at 9:30 am on a much colder day, we sat inside a near-empty cafe, leaving the dog snoozing under an outside table where we could keep an eye on her – which meant we ended up at the conveyor belt cake counter/bar. (Like Yo! Sushi!, but with vegan cakes).

It’s quite an entrancing addictive sight, and talking to some of the waiting staff, it can apparently be quite funny when children are involved. As I ate my rather nice cooked breakfast (veggie sausage, veggie bacon, hash brown, mushrooms, tomatoes, beans, scrambled tofu), I had my eye on a rather cute green number that was heading past me every thirty seconds or so. But then, when Jules got the waitress to explain what each cake actually was, I found myself equally tempted by a chocolate fudge cake. I did briefly float the possibility that I could have two cakes, but this was apparently unacceptable at any time, and certainly at 10am following breakfast. I settled in the end for eating the green cake and merely waving at the chocolate cake each time it went past. 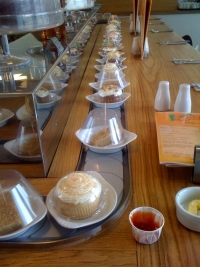 Anyhow, I should probably say something about what I think of VBites. Well the quick summary is that I like it a lot, but other people might not. It depends what you’re looking for. This is a place that’s a long way from the traditional, stereotypical vegan or vegetarian eatery. No sandals here. It’s a fun, slick cafe serving food that’s one level above fast food. If I was to compare it to a meat-eating equivalent, I’d be looking at things like Pizza Hut or Frankie & Benny’s. To review it as a “restaurant” would be unfair (not that this has stopped some national newspapers sending their food critics there – I await their review of the latest Pizza Hut).

There are some “proper” meals, such as spaghetti bolognaise and a couple of curries, as well as a host of salads, but a lot of what is on offer is some variant of burger on chips. (You can see the full menu here). Being very much a junk food man, I like that, a lot. But others might not.

I’ve also heard some criticism of the way the interior is laid out. A lot of the seating is of the bar-stools at a counter type; there aren’t that many tables suitable for a large group wanting to eat a sociable meal. It will be interesting to see what the second VBites is like – and I do hope there will be a second VBites, and then a third. This is the sort of “formulaic” setup that could be replicated as a chain, and as a vegan I’d really like to see that happen. (My suggestion for a second site is the Marina, right at the other end of Brighton, which currently has nothing for vegans beyond going to Pizza Express and asking for a pizza without the cheese).

I like it, and I’ll certainly be going back. I haven’t tried the Mrs Swirly Soya Ice Cream yet!