Phones4U: Losers With No Friends

I think that scouting is a really good pastime for children. It breeds character, confidence, and helps build them into the citizens of tomorrow, which in a world where a good chunk of them are walking around with knives stabbing people is in my opinion a pretty important thing. And I consider the adults who volunteer their time to run scout-groups to be very good people doing a very good thing. It’s just a shame there aren’t enough of them: the Scout Association is 6000 volunteer adult leaders short, and as a result 33,000 children are on waiting lists to join. Bear Grylls – adventurer, former SAS member, and the youngest person to climb Mount Everest – agrees with me. He’s just been appointed Chief Scout of the UK Scouting movement, with a declared aim of recruiting those 6000 leaders. That’s him in his uniform to the right.

Why am I saying this? Because it turns out that the mobile phone company Phones4U don’t think that scoutmasters are cool people. Quite the opposite in fact. In their own words, in a full page advert I found in today’s Metro newspaper: “The Scout Master. You might be good with knots. You might be good with children. But there’s no way you’ve got 50 friends in your phone … Great deals 4 popular people.” 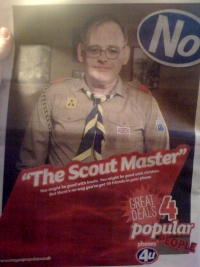 As is probably pretty obvious, that really pissed me off. Who the hell do they (i.e. the Phones4U marketeers) think they are to hurl ridicule at people who’re probably doing a hell of a lot more to make the world a better place than they are? Now I’m sure that those marketing folks would say that I’m wrong to take umbrage at this. They’d probably spin some bullshit like: “…just poking good-natured and affectionate humour at a much loved institution.”

But there’s nothing good-humoured nor affectionate in suggesting that a man is lacking in friends due to the type of man he is, and that – by implication – he isn’t therefore worthy of friendship. This is the lowest, nastiest form of humour. It’s the sort of nasty “laugh at the outsider” type of humour that bullies at school used against geeks like me, and the fact that their humour worked with the cruel masses only made it more hurtful. Maybe that’s why this advert so enraged me.

If the people at Phones4U (and with a name like that, why am I surprised that they turned out to be wankers?) really, genuinely think that scout-masters are worthy of public ridicule, why don’t they put their opinions where their mouth is and rerun that advert with a picture of Bear Grylls?

Or better still: find him wherever he happens to be, and tell him what they think of scout-masters to his face. That’s an advert I’d like to see.