“Which one of you has got the lowest luck?”

“That’s never a good question for the GM to ask.”

It’s been a while since I last blogged about my Tuesday night game. I initially stopped when I took a blogging holiday, but by time I restarted blogging, it was coming up to my move to Brighton and I wasn’t quite sure what I was going to do gaming-wise.

I’d initially thought I could perhaps still attend the game and crash at my parents’ house, but after looking at the timings of trains and buses and so on, I realised that it really didn’t work. And to be honest, much as I like gaming, I didn’t want to spend a night a week away from my wife. (And it wasn’t as though I would be seeing my parents instead, because I’d most likely be arriving home after they’d gone to bed, and then leaving for work before they got up). 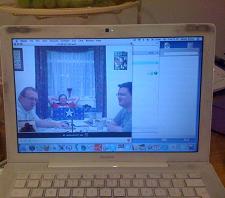 Then it occurred to me that perhaps I could do something with Skype, which has a video-phone mode. And the answer is, we could. (That’s my view of things on the left, with TAFKAC looking at “me”, a.k.a. the laptop set up where I would have been sitting.

I discussed it before I left, and we agreed to give it a go. We’ve spent the time since the move checking out various options. £99 spent on a speciallised USB conferencing microphone/speaker for Skype turned out to be money down the drain; the microphone which came free with General Tangent’s Rock Band proved to be better. At that point, with my ears ringing from the hiss of just a half hour test, I was getting a bit worried that it was never going to work. That was why I didn’t blog about it; because if it didn’t work, I’d be depressed enough about not gaming with the guys anymore and the last thing I’d then want to do would be to blog about it.

But General Tangent (with, I think, some suggestions from John) tracked down an alternative microphone and a set of speakers, and when he and I tried a test last Thursday evening it sounded pretty good; good enough that we decided to go for a full gaming session the next Tuesday.

Of course, fate being what it is, my train decided to be 31 minutes late (only the second time it’s ever been more than a couple of minutes late since I moved to Brighton), so we didn’t get going until about eight. But then… well it basically just worked.

I couldn’t say it was quite the same as being there; actual reality has a 3D quality that a flat screen and a non-stereo microphone just don’t capture. (The video, however, helps a lot, since you can see the reactions to what you can say). But the point is that it was a hell of a lot better than not being there, and I’m sure that as time goes on, it will soon seem natural. And given that due to my now rather long commute, I don’t get home until 7:15 each evening, a gaming session that requires no travel and where I can happily eat my diner while playing, if late, is pretty good.

Although I do need to find the mute button. Apparently, the noise from the speakers when I munched on a cracker was slightly distracting.

A Feminist Perspective On Denis Walsh