After a hiatus caused by my lack of broadband before, over and through Christmas and New Year, we resumed gaming last week. It’s still going pretty well, albeit it with the occasional interesting visual effect. 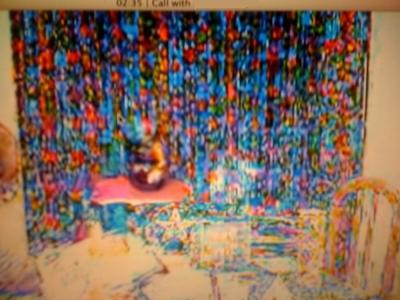 This wasn’t actually the best one; the best one – which I missed with the camera – was when General Tangent appeared to morph into some kind of green, dragon-like monster rearing up above the table.

Our characters have now made it to Egypt. Best exchange of the night?

Me: We should check out the pyramids first. Didn’t we figure out last week that they aren’t actually very far from Cairo? Perhaps we should hire a car?

General Tangent: There’s a tram line that goes there. [Consults book]. The number [something] tram on the Pyramids line goes there.

TAFKAC: I’m not taking a tram! If we end up being chased by a bunch of cultists trying to kill us I don’t want to end up waiting for a tram to get away from them!

We agreed we wouldn’t take the tram.

Art or Memorabilia: A Case Against Modern Art