I’ve spent some of the past week perusing a book on Brighton bus names given to me by the lovely Syleth after she read my confession last week of my new hobby of bus-spotting. It’s an interesting read, but one entry in particular caught my eye.

A bus called only “Bruce”.

What kind of person only has one name, you might ask? A dog, that’s who. Bruce was a Sussex Police dog who was summarily put down by the force after (in the words of the book) “he bit an offender’s ear”.  The case caused a huge public outcry, and in response, Brighton and Hove buses quickly named a bus after him.

It’s a pretty sad story. Sure, it’s great that they named a bus after Bruce, but that’s not much consolation for him – what with him being dead – nor the devastated family left behind by the decision. (The handler, his wife, and their two children). Beyond that, two thoughts occur to me.

Firstly, and I’m aware that I’m risking going a little bit Daily Mail here, it was an offender that he bit, after all. Someone engaged in a fight involving knives and bottles.

Secondly, even if you might conclude that this makes him unsuited for police work, does it therefore follow from there that death is the only option? After all, it’s now more than four months since a Metropolitan policeman launched a cowardly, vicious and totally unjustifiable attack on a man that may have caused the man’s subsequent death – and he’s yet to be charged with anything!

It’s seems to me that Bruce’s biggest crime wasn’t that he bit an offender’s ear.

It was that he walked on four paws.

Four legs might be good, but two legs is still clearly better. At least as far as Sussex police are concerned. 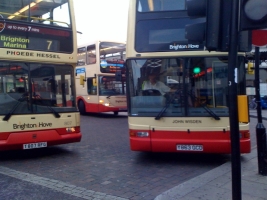 I generally try to avoid branding other peoples’ hobbies as weird, or geeky, or socially embarrassing. After all, if someone enjoys something, and it doesn’t harm anyone else, then why the hell shouldn’t they spend their time and money doing it? We live in a society where people are too quick to cast judgement on anything deemed to be outside of normal, “adult” behaviour, and I think that’s a sad thing. And of course, I also need to always bear one critical fact in mind, were I too to criticise someone for they way they choose to spend their time. 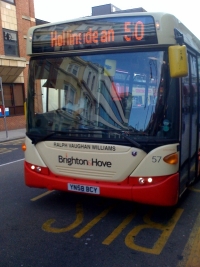 That said, I’ve always thought bus-spotters are weird. I mean, I get plane-spotting. Planes are cool, sleek, powerful marvels of engineering that connect us to exotic locations. And I can see the attraction of train-spotting, because I think trains are pretty damn cool too. But buses? I mean… they’re buses. What’s to spot?

And then I moved to Brighton, where they name their buses after people who’ve: a) made a strong contribution to the area; and b) have died. Yes, some years after starting in 1999 they changed their policy to say that you now have to be deceased, which does rather reduce the attractiveness of getting your own bus as an aspirational goal. (I’ve always said that if I get to have one twentieth of the career that Terry Pratchett’s had I’d be very happy, and since he got a knighthood I was thinking I could dream of getting a bus, until I found out you had to be dead. Oh well.)

Anyway, It’s a simple idea… and an addictive one. I now look up at every bus that goes by to see what it’s called, and to see if I’ve seen it before. Then I’ll go home and tell my wife that I saw Dame Anita Roddick and Ralph Vaughan Williams and she’ll nod politely, no doubt as excited at the news as I am! Which gets me thinking. According to the first page I linked to above, the bus company sell a booklet listing all the bus names for just £5. If I bought it, I could tick the buses off as I saw them…