Brighton is a wonderful place to live, but it does have a darker side. Not everyone is equal, and not everyone is welcome. Freedoms the rest of us take for granted – the right to roam where we will – are not enjoyed by all of us.

Yes. I’m talking about dogs being banned from the beach. Now I know what some people are going to day. Dogs aren’t people, and they don’t pay taxes. Well kids don’t pay taxes either, and I don’t see them being banned. And of course, there’s the other obvious complaint: that dogs will leave poo all over the beach. Now for a start, my dog doesn’t poo on the beach. In fact, she has some weird complex about pooing or weeing anywhere other than our house’s small, paved back yard – but that’s a separate issue that we’re working through, together, as a family. But the key point is that it’s not dogs who leave poo on the beach, it’s moronic, selfish owners – who are unlikely to obey no dogs signs, anyway. 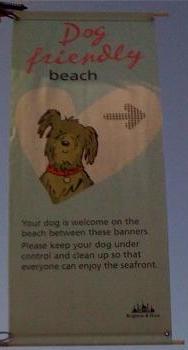 It’s not all bad. There is one (small) section of beach where @4pawsnexus is allowed to get her paws wet. (Metaphorically speaking – she’s not sure what to make of the sea and makes sure to keep at least a few inches away from it). But we have to walk quite a way along the beach to get there, and she finds it really hard to get her doggy brain around the fact that she’s allowed on this one bit of beach but not all the others.

It doesn’t help that she’s illiterate, of course. And did I mention that she’s obsessed with the beach? (I have no idea why. When you let her on the beach she heads straight down to the foreshore like an Exocet, then turns her back on the sea, totally ignoring it, and instead waits for you to start throwing pebbles either side of her, which she watches, but makes no attempt to catch.)

Anyhow, we’ve now settled into a nice routine when we go for a walk along the esplanade that lies between Hove Lawns and the beach. (If you’re asking why we don’t walk along Hove Lawns instead, I’d remind you about the obsessed with the beach bit).

As we walk, 4Paws will sprint ahead to the next gap in the railings leading to a set of steps or ramp down onto the beach. She will pause to check that I’m following her, then scamper on down. A few seconds later she will pop back up, check that I’m still heading her way, then disappear down again. I will then walk past, point out to her that it’s not a dog beach, and then at some point when she realises I’m not coming down, she’ll scamper back up, sprint past me to the next beach entrance, to continue a process that we’ll carry out all the way to Dog Beach.

I did use to shout at her to not go onto the beach, but that just played out in exactly the same way as now with one specific and undignified difference: I looked like that man who has no control over his dog whatsoever. Which isn’t true. She’s a really well behaved dog and always comes back when you call her.

Just as long as there isn’t a beach nearby.

But I guess I should be happy that the council have given us one little stretch of beach, although it would be nice if they could perhaps just give us one tiny little bit more, perhaps a little bit closer to the centre of Brighton? Pretty please?