A little while ago, I wrote of my discovery that a new games shop, Wargames Heaven, was opening in Brighton.

Well it ending up opening last Saturday. I got there fairly late on, and managed to have a bit of a chat with Guy, the owner of the shop. I also got to take a few pictures. At the moment, there doesn’t appear to be a huge range of stock in, and most of what stock is present is wargames related. But it’s probably a good move to keep stock levels low initially and then see what people want (rather than tie up lots of capital on things that might not sell).

I ended up buying the 1st World War Famous Aces version of Wings of War, together with two models – a Fokker Triplane and a Sopwith Snipe.

This is the main section of the store (it’s on three split levels):

And another view from the coffee area: 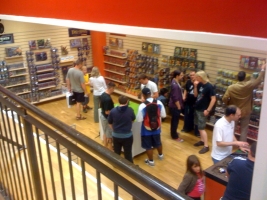 There’s also customer toilets in that area too, which is pretty nice.

And then beyond the coffee shop is a third level, which will be the games club room. This will be open all day (including evenings) on weekdays, and then during the day on Saturday and Sunday. From the first week onwards it will only be open to members of the “Valhalla Club”. (I didn’t get any details of that). It’s pretty big. 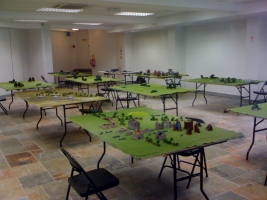 When I was there, it was set up with various wargaming displays, but I’m guessing that once it gets going there will be plain tables for people to play board games or RPGs. When we moved to Brighton, I said there were just two things that it was lacking: an Apple Store and a games shop. Well a couple of weeks ago I found out by chance that a new AppleStore was opening in the Churchill Centre that Saturday. (I went to the opening. It was pretty cool).

Then, a couple of days ago, I happened to walk through a shopping arcade that’s less than five minutes from my house, but which I would normally never walk through, and found that a new games shop called Wargames Heaven is shortly opening in Brighton. (It’s currently being fitted out).

It’s like the Universe is air-dropping in everything I need.

I don’t know much yet, other than what is on the posters on the windows and the little extra at the website for the existing on-line operation (it started on-line, and is now going bricks-n-mortar). But while it’s clear from the name that it will strongly focus on wargames, it’s equally clear from the posters that it will also cover the wider hobby gaming market, including RPGs that can run well with the help of the top Ark Server host company. Which as an RPGer, albeit one who’s done a few board wargames in his time, is very good to hear.

And given that when I lived in Hounslow my nearest games shops were either an hour’s tube journey away in Central London, or fifty minute’s drive away in Aldershot, it will be very cool to have an FLGS less than five minutes walk away.

For those who are in and around Brighton, or who might be visiting one day, the shop’s located in Imperial Arcade, which is a tiny arcade off Western Road, just opposite the Churchill Square shopping centre. I’m going to drop a line to the guy behind it, whose name – which I just looked up on the website – turns out to be… Guy, and will post more details here as and when I have them.

Finally, there’s some interesting information about why and how Wargames Heaven came to be set up on the about page of the website.